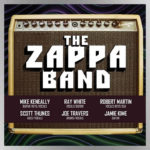 The Zappa Band, a group mostly made up of former members of the late Frank Zappa‘s backing bands, will launch its first-ever headlining tour in June, a series of dates in the Northeast that will follow a trio of concerts in California.

First up for The Zappa Band are California shows on May 22 in Banning, June 3 in Escondido, and June 5 at the famed Los Angeles-area club the Whisky a Go Go.

The U.S. trek kicks off in earnest on June 12 in Homer, New York, and winds down with a June 26 concert in Plymouth, New Hampshire. The 11-date outing also includes a June 16 stop at Sony Hall in New York City.

“A lot of amazing Frank Zappa music played with intensity, humor and love,” says Kenneally with regard to what fans can expect from Zappa Band concerts. “We’ll be enjoying the opportunity to play different material from night to night; we know that often people like to attend multiple shows, and our repertoire is presently large enough to be able to change things up.”

You can check out a list of the group’s confirmed shows at The Zappa Band’s official Facebook page.

Greg Stone
Up Next
Jim Coda