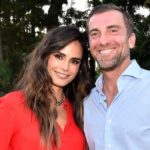 Congratulations are in order for Fast and Furious star Jordana Brewster, who announced Tuesday that she is engaged to Mason Morfit.

Following reports that she was seen with a massive sparkler on her ring finger, the 41-year-old actress took to Instagram to confirm the happy news. Sharing a photo of the two cozying it up by the beach, Brewster gushed, “JB soon to be JBM,” and decorated the caption with red heart emojis.

The photo also shared a closer look at the F9 star’s engagement ring, which appears to be a circle-cut diamond, yellow in color, nestled on a brilliant gold band.

Brewster and Morfit, a businessman, first sparked dating rumors last year but have remained relatively private about their love life. The actress was previously married to movie producer Andrew Form, her husband of 13 years.  The two share sons Julian and Rowan, who are eight and five, respectively.

Brewster opened up in June about her divorce in an op-ed published by Glamour, writing that the two drifted apart because they wanted different things in life.

“Most of why my marriage didn’t work was not my ex-husband’s fault.  He loves work. He loves being on set, on location. I knew this from ages 27 to 32, but it became a problem for me once the kids were older,” she wrote at the time. “I wanted a partner.”

She also opened up about Morfit, saying she found him “cute” and “charming” when they first met and that she could see herself marrying him one day.

Brewster nor Morfit have hinted when they will walk down the aisle.