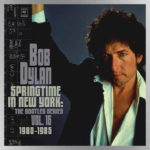 The 16th and latest installment of Bob Dylan‘s The Bootleg Series archival collections is due out September 17 and will focus on the sessions for three of the lauded singer/songwriter’s early-1980s albums — 1981’s Shot of Love, 1983’s Infidels and 1985’s Empire Burlesque.

Springtime in New York: The Bootleg Series, Vol. 16 (1980-1985) will be available as a deluxe five-CD, 57-track collection featuring 54 previously unreleased recordings, including many outtakes from the three aforementioned albums, as well as rehearsal recordings, live performances and more.

The first disc of the deluxe set features mainly rehearsal recordings from 1980 and ’81, including versions of earlier Dylan tunes, select covers and reworked traditional tunes. It also features a Shot of Love studio outtake — a cover of the Elvis Presley classic “Mystery Train,” with Ringo Starr on drums.

Springtime in New York‘s final disc boasts a variety of Empire Burlesque alternate takes, a live rendition of “Enough Is Enough” from a concert at Ireland’s Slane Castle, and a performance of “License to Kill” from a March 1984 appearance on Late Night with David Letterman.

The deluxe Springtime in New York set comes packaged with a book, memorabilia, photos and more. The collection, which you can pre-order now, also will be released as an abridged two-CD set and two-LP vinyl set. In addition, a limited-edition four-LP package pressed on colored vinyl will be issued by Third Man Records as part of their Vault Series.